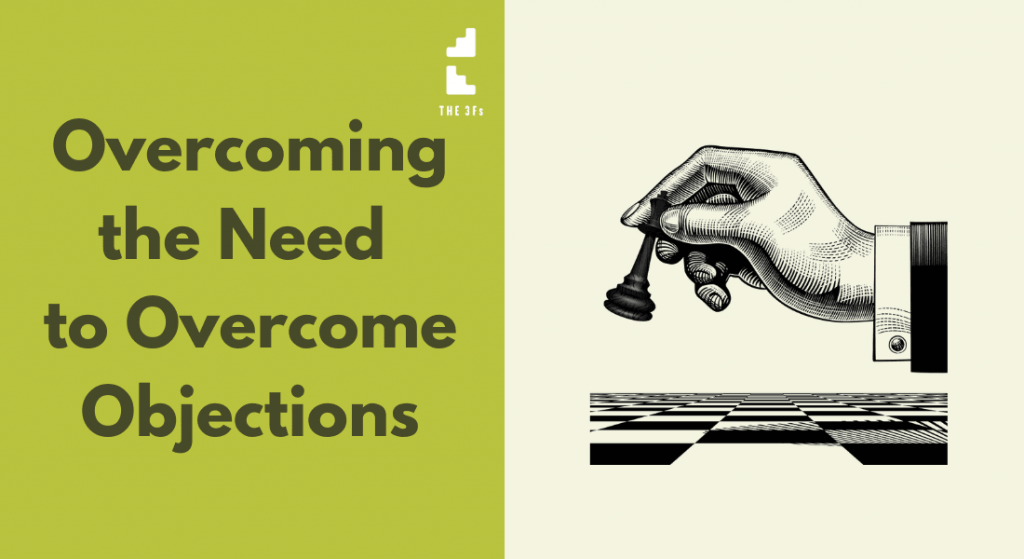 Objection handling; knowing how to overcome objections in order to “close a sale”, is seen as a core aspect of business. But does it need to be?

There is an assumption in business that it is natural to face objections and obstacles when trying to sell. And traditional advice for overcoming this is to predict what those objections are likely to be, and prepare answers for them. Have the perfect responses ready, so you can allay your prospects’ concerns and encourage them to buy.

And sure enough, this isn’t bad advice in itself.

However, objections – when it comes to sales – are essentially people saying: “I’m not sure I want it enough….”

Which means that overcoming objections comes down to having to convince them that they do.

And THAT is where the question lies….

So is looking for ways to CONVINCE someone to buy as a means of “overcoming objections” – i.e. planning for something that effectively gives your prospective customer the upper hand – the best business strategy? Or is there a better way to approach objection handling?

What are the usual objections to overcome?

Objections largely, ultimately, come down to not understanding (or believing) the VALUE of a proposition.

If we can clearly see the value that something offers, we instinctively know whether or not WE personally want it, and if we’re prepared to spend the time and money on it.

If we can’t, it’s the opposite. Meaning we will either write it off completely, or we need to be convinced of its value.

So objections usually come down to the fact that people just can’t quite see the value of the proposition….

There is a litany of “usual objections”, and they all follow this theory:

“I’m not sure it’s right for me”… Does it solve a problem they have? Yes? Then it is right for them … which means they just don’t understand the value you will bring.

So, an “objection handling strategy” of having the perfect response ready for each of these is one tactic … but it’s a tactic in which you’re starting on the back foot. You’re starting with the “lower hand”, and having to persuade them … convince them … of the value you will bring.

Which as much as anything else, is a waste of your time….

So rather than overcoming objections by persuading prospects of your value, what if you just made it compellingly clear of your value upfront, and let them come to you?

Objection Handling by doing nothing…

Someone views it, loves it, wants it … and offers lower than the asking price … because that’s just how it usually works.

What happens next is down to your approach and your mindset….

If you know it’s worth the asking price, and you aren’t under any pressure to sell … you know you don’t need to persuade them. If they really want it they will come back and offer the full price.

So you hold firm, and more often and not, they come back with that higher offer.

Of course houses are one of the most expensive things most of us will ever buy, so the “can’t afford it” objection is often a genuine one, based on our salaries and so on, yet STILL people often come back with a higher offer. Because they CAN see the value … they know what they’re getting, they know they want it, they know it IS worth paying what is being asked … and they don’t want to miss out.

You haven’t had to do anything at all. No “persuading” them of its great features, no “convincing” them that it is a wonderful home and they won’t regret it. You’ve just allowed them to come into your home, so they can see for themselves – clearly and with their own eyes – what they will get for their money. And you’re leaving them to make the decision.

And you know that if this person doesn’t buy it – so long as your price is right, based on the quality, the size, the location … the value … of your particular house – someone else will. And you won’t have to persuade them, either.

So when it comes to selling your services … rather than focusing your business strategy around objection handling – trying to “deal with” those objections by persuading, explaining or justifying … instead, “UNhandle” them….

Put it in their hands … make it about THEM wanting to choose YOU.

“UNhandling” objections by driving demand for your value

So how do you “unhandle” objections? You handle them before they become an objection, by answering all the questions that objections are born from….

You show your prospective clients, upfront and early on, the VALUE they will get from your services.

Define your prospective clients’ problems: what is really going on for them, what do they need, and show them how YOU solve those problems.

Clearly define the benefit … the results … the ease … the speed … the whatever-it-may-be value that your service provides.

Be specific to their problem. Not just “I’m a VA” … Tell them “I bring all your X, Y and Z together, I handle A and B without you needing to even think about it, I take F and G off your plate entirely and I’ll save you Q amount of your valuable time, and increase your W substantially, by doing so!”

Show those prospects that “I have something you really want!” … and let them start to really want it….

Because if people can see what you’re able to offer, and they like it … you don’t have to play the “overcoming objections” game … they’ll simply accept the terms you’re offering.

The queues outside an Apple store following every newly-released iPhone model is proof enough of that. Are any of those customers asking the staff to justify the price of those phones? Or have they already decided that they “want it” enough to pay whatever price tag Apple are applying…?

Of course, you’ll still have the odd conversation with a prospect who needs a little convincing … a little explanation … a little more “detail”. But again, don’t try to “manage” or handle the objection … simply “unhandle” it with a statement of fact:

“It’s rather expensive” = “I can see why you might think that, but this is the benefit and this is the result … this is what you will get in return.”

… and let them make the decision.

So don’t waste your time trying to convince anyone.

When they “demand” (i.e. want) a solution, they value it.

So, have a clearly defined, value-led offer.

Keep your message strong and clear.

And allow your prospects to “handle” all their internal objections themselves….

Allow them to decide if they’re going to jump in and grab it, or miss out.

FOMO is more compelling than pleading, convincing or persuading.

Unless you believe your offer isn’t strong enough? … In which case, your problem isn’t “objection handling” – it’s more fundamental, and that’s part of the magic I bring.