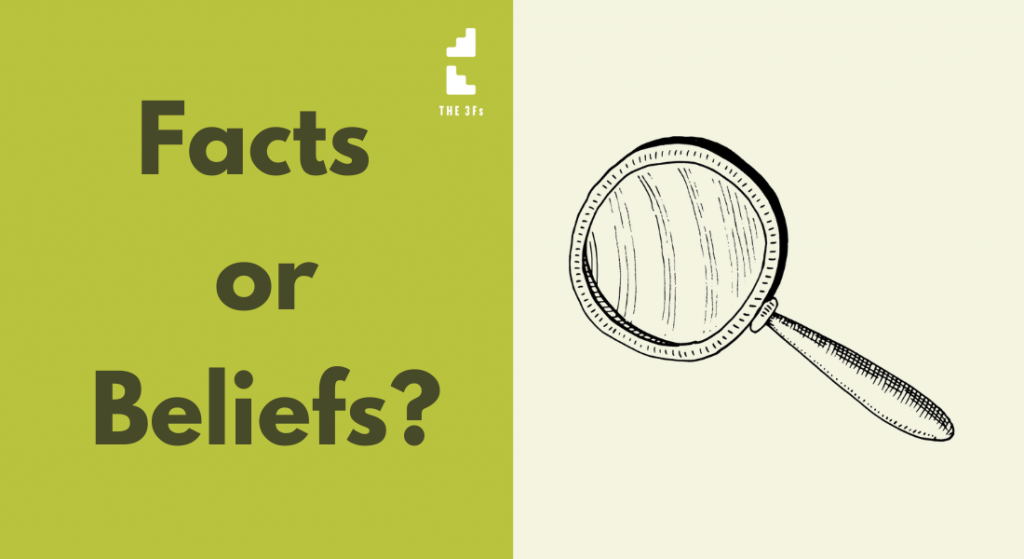 I spent the day with a good friend and their young baby recently, and was reminded of the charming lack of knowledge we as humans are all born with.

They have no fear of rolling off the bed, as they don’t yet know that a little thing called gravity will mean they fall to the floor, and that it will hurt.

Children aren’t born knowing that a recently made cup of tea will burn them if spilled. Or that a sharp knife has the ability to cut open their skin. They don’t instinctively know that dropping a glass will mean it will break …

These are just some of the many facts of life that we all come to learn and understand, as we progress through our lives.

Some of them we learn the hard way … by falling off the bed, or cutting ourselves with a knife.

Our parents, our teachers, our friends and family, the world in general … they teach us, bit by bit, little by little, how things work. How LIFE works.

As kids, though … we often want proof.

Tell a child not to touch a hot pan, and you can see the struggle in their eyes not to touch it. Because it’s a “rule” they can break? Perhaps …

Or because they just want to know for sure? Perhaps this, too …

So often a child DOES still touch the pan, and sure enough, they find out that it IS hot, and it DID hurt. The adult was right.

Won’t do that again, then.

So gradually, particularly as we get older, we seem to stop testing for ourselves. We trust in these wise adults, and we accept what they tell us as the truth.

We believe what we are told.

Now a lot of the time, this is a good thing.

I, for example, am happy to believe that putting a live electrical appliance in a bowl of water will result in a serious electric shock. I have never felt a need or desire to test out this theory for myself.

Similarly I’m sure it’s true that a viper’s bite has the power to kill me. I don’t feel compelled to provoke one in order to know for certain.

And there are the less “tangible” facts as well of course.

For example, knowing that listening in class and studying prior to an exam will mean you are considerably more likely to pass, is a similarly useful “fact of life” that I’m sure most of us utilised during our school days.

So, facts are useful. They enable us to make a sensible decision, or strategy, based on the reality of the situation.

Should we believe everything we are told to be true?

However, are ALL the facts we are told … or discover … actually true?

Or are some actually just theories, or personal opinions? Maybe some are just common misconceptions, which get told over and over, to person after person? And others … maybe they are facts that are “true” for some people, but not for others …?

Perhaps not everyone WILL do better in an exam if they study? Perhaps some people will ace it without ever attending a class, and others will fail no matter how hard they try …?

So maybe, some of these “facts” aren’t as accurate as they seem.

Maybe our parents, teachers, friends and colleagues, for all their good intentions, sometimes get it wrong?

Maybe it isn’t even other people … maybe some of our “truths” we’ve even made up ourselves?!

And perhaps, as a result, we are left with BELIEFS that are shaping our decisions.

Beliefs, rather than facts … that perhaps, are steering us in the wrong direction?

What if we all took the kid who studied, but still failed, as the PROOF of that outcome? … “Well, there’s no point in ME studying either, as it obviously doesn’t work.”

And the outcome from that belief? A lot of failed exams, I’m sure …

Ok, so maybe that one is too obvious to have got wrong. But there are plenty of other beliefs that ARE likely to be affecting our actions.

If we believe that “work is meant to be hard” … maybe we won’t even look for an easier way.

If we believe that “I can’t charge more than £X” … maybe we won’t even try to charge what we’d really like … or need.

If we believe that our clients will “always be looking for a cheaper option” … maybe we will reduce our rates, unnecessarily.

If we believe that “I won’t be able to make a success of it” … maybe we won’t even try in the first place.

Maybe a lot of our actions are, actually, based on beliefs that we just THINK are facts?

So maybe we need to revert to our more childlike attitude … perhaps we need to go and touch that hot plate, every now and then, to see if that “truth” is indeed true … or at least, to find out if it is true for US.

And maybe we’ll find out that we had a few things wrong.

Maybe we’ll find out that people WILL pay a higher rate for our services?

Maybe we’ll find out that we DO have the ability to learn another skill, or that work CAN be easy.

Maybe we’ll find out that we CAN succeed.