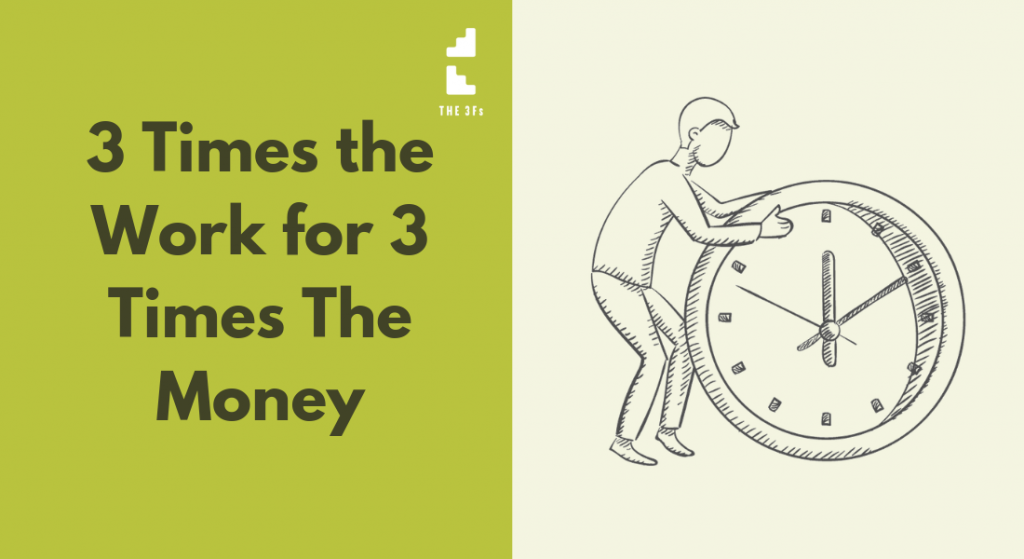 I was chatting with one of my son’s friends the other day.

He was telling me about how he is currently working three jobs, as he is desperately trying to save to buy a car so as to fully enjoy his newly acquired, shiny driver’s licence.

It’s not quite going as well as he’d expected though, so he was taking the opportunity to “let off some steam”.

He thought that THREE jobs would be a sure fire way to earn, and save, as much money as possible in a short time … Three jobs should be three times more money, surely!?

His three jobs are all completely different. He’s working as a waiter in a busy restaurant, a shop assistant in a high street clothing store and had signed up with a temping agency for ad hoc office-based admin roles.

Other friends of his were doing similar jobs – some even the exact same jobs – and all were earning great money: amazing tips, huge commissions, great hourly rates …

But he felt like he was just running around in circles, and not nearly getting enough money to show for all his hard work.

For the most part, he was just getting a base salary – which wasn’t much to get excited about – with measly tips, minimal commissions, and he only seemed to be getting offered the lowest paid temporary admin jobs.

So, understandably, he was feeling pretty fed up.

“I feel like I’m working 24/7,” he lamented, “I’m missing loads of great parties, and fun things my mates are doing, I’m knackered, and I’m still miles away from being able to afford a car. It just doesn’t feel worth it!”

Knowing him well, and knowing he has every potential to be great at all three of these jobs, I pushed him to think about why he might not be getting the best tips, or commissions, or hourly rates …

“Probably because I’m too tired to give the customers the best service,” he eventually admitted. “I’m always running straight from one job to the next, so although I try … and I really do … I think I just don’t have the energy to give it my all.”

And that, I told him, was indeed most probably the issue.

Three jobs sounds like it will mean three times more money, but it also means being spread three times more thin … so the jobs become, shall we say … three times harder? Who knows … they definitely become harder though, as it’s more tiring, more stressful, and not to mention more demotivating, when we’re not getting the results we want!

I suggested that perhaps he thought of a different approach … That he focused on making the way that he earned money, work for HIM?

And to do that, I suggested that perhaps he needed to focus on two main questions …

WHY is he doing what he’s doing, and WHAT do the customers he’s serving REALLY want?

If he could get clear on those points, I said, he might just become clearer on the best WAY to achieve his goal …

Easy answer. It was, of course, the latter.

And what about his customers? What do they really WANT? Is it important to them that HE personally is the waiter serving their dinner, or selling them a shirt, or completing their admin task? Or do they just want a nice dinner with good service, someone to help them find the perfect shirt, and to receive an accurate high-quality piece of completed administrative work?

It’s not a case of just HAVING the job. Of just BEING there, that is going to earn you the money … It’s about giving those customers exactly what they WANT. What they’re really there for …

“So,” I suggested, “If you’re able to focus on ensuring you’re always delivering – or better yet, exceeding! – what those customers want … maybe THAT will be the way to start getting those tips, commissions, or higher rates …?”

And in order to do that, maybe it was important that he WASN’T tired, or stressed, or fed up …

Maybe it was the combination of those 3 different jobs, with their different needs, and long combined hours, that was making it impossible to do any ONE of them to his best ability?

So maybe, by focusing on just one of those jobs, he’d be able to earn the same – or maybe even more! – as all those three jobs combined.

He decided on the spot to give up two of the jobs and focus on the restaurant – the job he knew he has the best potential to excel at. He decided on the spot to focus on being the best waiter he could be, to give his customers the best meals, evenings, occasions they’d ever had … and, by doing so, know that he’d earn the best tips, and thus the best salary, he could hope for. Plus … he’d have the added advantage of getting some of his life back!

For me, it was an easy answer to see, as this is an all too common problem with small business owners …

Many of us think that having more clients is the best solution … the best way to earn more money.

But in reality, it can be the very opposite.

Too many clients, and there’s not enough time to give each of them the service they REALLY want. Which means you’ll probably not be able to charge them the highest rates.

So you’ll be BUSY, but you’ll not be PROFITABLE …

Or maybe your rates are such that you have no choice? You NEED lots of clients, to make the money add up each month …

Maybe – like my son’s friend – you just need to find your right “model”?

For more insights on how you can package your offer to work with less clients and earn more, click here …