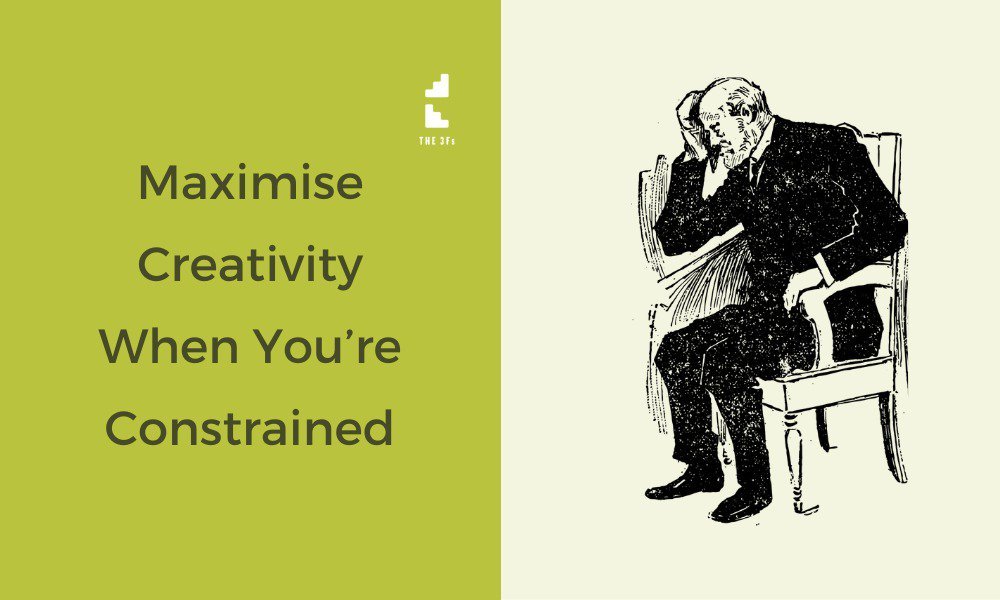 You’ve got a bulging to-do list but can’t find an ounce of creativity, energy, or inspiration. It sucks, doesn’t it?

The result? That to-do list just gets bigger, and bigger.

You feel increasingly constrained and challenged while everyone around you appears to be thriving.

The good news? The fact that you feel like this at all is a huge opportunity.

Believe it or not, creativity comes when you’re constrained, and, once discovered, can lead to greater freedom and fulfilment.

Let’s think about some areas in life where we’re often constrained, and how one might respond.

Notice how Scenario B is always the better one? Remember: from constraint, comes solutions!

Putting your constraints to work

Maximising productivity under the most trying of situations might sound impossible, but let’s look at some cases.

Say you want to double your revenue in just two years. Only, factors outside of your control mean you now need to double it in FOUR WEEKS… or face closure.

You’ll find some creativity, won’t you?

If that two-year plan was still a goer, you’d spend the next year simply doing more of the same while pontificating on how you might one day hit that double growth figure.

After all, two years is such a long time, isn’t it?

But if that deadline is suddenly just four weeks away, you’ll immediately start thinking of a different way to do what you’re already doing. Because, clearly, a slow iteration process isn’t going to get you anywhere.

Why not ask a very different question: “how can we get clients for the product THIS MONTH?”.

What’s stopping Company ABC from gathering early sign-ups for that product and sending them early versions to help speed up the development and testing process?

A far more pressing example of feeling constrained is the seemingly never-ending wave of COVID-related lockdowns we’re all experiencing.

If the lockdown has removed you from the comfort of your normal workplace, you might be feeling constrained.

Everything’s different, from the desk at which you’re expected to run the business to the way customers are interacting with you.

This clearly requires different thinking. It needs some CREATIVITY on your part. Because, let’s face it, if you continue doing the same thing, your business may not survive.

So, instead, think about what needs to change. Don’t think about how you can work the same under different and tricky circumstances. Change the way your business operates, from root to branch – respond to the constraints you’re now facing as creatively as possible.

Thinking about what could change

I’ve hit you with a lot above, so I want to leave you with two pieces of homework.

Think about how you could change the following two elements of your business to deal with any current constraints you’re facing:

Don’t let constraints stop you from thinking creatively. Treat it as an opportunity, and the answers to the above will come thick and fast – trust me.