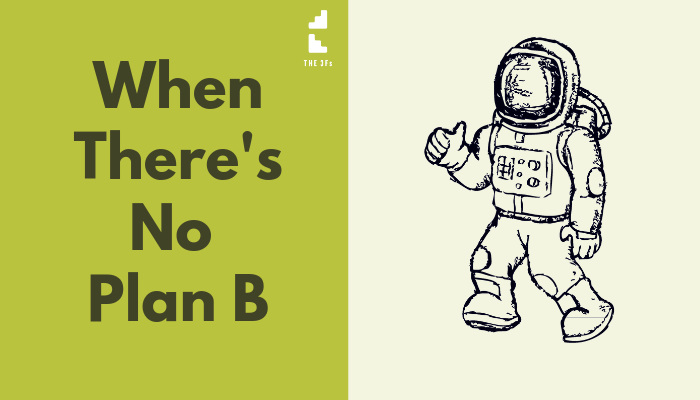 Did you see the programme last night? – 8 Days To The Moon And Back.

It’s 50 years since Apollo 11 took Neil Armstrong and Buzz Aldrin (and Michael Collins, who everyone seems to forget!) on that incredible journey. (I wonder how Collins DID feel in the weeks, months and years after?!)

After the “Eagle has landed”, it wasn’t until the next day that the two astronauts left the capsule to stand on the moon.

Because, doing their routine checks after landing, they found one switch that had broken off.

As you may imagine there were DOZENS if not HUNDREDS of switches in that capsule … and they found ONE had broken.

Turns out it was the one that **fired the engine which would lift them OFF the moon** to return to the mother ship.

If they didn’t fix that switch … THEY’D BE STRANDED ON THE MOON.

During the looooong hours while the problem persisted, NASA revealed there was no Plan B. The life of those two astronauts depended ENTIRELY on their ability to fix that broken switch.

Scientists worked all through the night to find a solution. Each potential fix was complex and might not work.

When Buzz Aldrin awoke he had a flash of inspiration … and fixed it.

While the scientists were developing complex ideas, Buzz was faced with LIMITED resources, and a SINGLE PRIORITY.

He fixed the problem using just a felt tipped pen!

And naturally we know the rest of the amazing story.

In my observation it’s so EASY to make things COMPLEX, and yet complexity rarely delivers what we REALLY want.

I’ve found that SIMPLIFICATION TAKES MASTERY … and a lucrative, easy to run business CAN be simple.

It’s not easy … but it’s (literally) not rocket science!