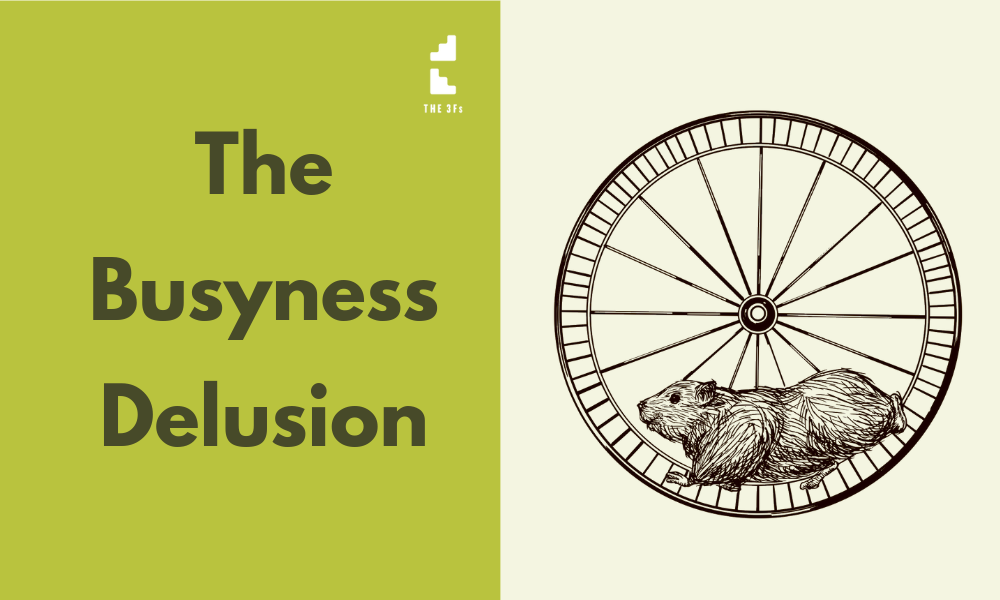 Are you experiencing the Busyness Delusion? …

The common response to chasing success and wanting to earn more money is to make ourselves busier.

However, in doing so, we find ourselves over worked, over stretched and further away from our financial security and freedom.

Let me introduce Simon and Victor . . .

You probably know them.

They’re at different stages in businesses, yet have something in common … they’re both experiencing the Busyness Delusion. It shows up in different ways for each of them.

Simon is Type 1, and Victor Type 2 … the chances are these will apply to you too …

Busyness Delusion Type 1 happens when “earning more” is the priority, and “how to earn more” is uncertain. Simon copies what he sees everyone else doing. He thinks “time is money” and charges this way.

He follows the crowd, believing he needs to work harder, to earn more. It seems to work for him too – charging for his time, he does earn more by working longer hours. His strategy is “head down, and keep on going”.

In the short-term Simon earns enough. At least, he has enough financial reward. But it comes with a heavy price tag – tiredness gradually leads to exhaustion, he’s forced to keep the workload hamster wheel spinning. He has neither the time nor the energy for his wife and children. He’s “physically” present, but they see him slipping away. “Things aren’t like they used to be.”

Busyness Delusion Type 1 is the trap of “working harder to earn enough”.

Victor finds himself in a position where business is growing which is great!! But he’s also battling to keep everything afloat. He’s spinning a lot of plates. In the end, it’s all down to him.

How does Victor cope?

He comes in earlier, leaves late and tries to know what everyone’s doing. His over-riding fear is that other people could drop the ball at any moment.

Inevitably, Victor finds there aren’t enough hours in the day!

And similar to Type 1, he feels the pressure will never end.

He wishes things would just get better, he just doesn’t know what to change.

To understand Simon and Victor we need to understand how they became Type 1 and Type 2 of the Busyness Delusion.

Type 1 Simon started his IT support business three years ago. So far, he’s yet to reach financial security.

He’s nearly replaced the salary he had when he was last employed.

Nearly, but not quite.

Simon believes it is possible to achieve financial security. He certainly hopes so, as his pride is at stake.

His answer is to work hard.

He puts in the hours.

“It’s a numbers game,” he tells his friends.

He thinks if he keeps getting out there enough, eventually he’ll find enough clients.

He wishes he could break out of this cycle, yet when he’s got too much work he doesn’t have the time to do the marketing for future work.

He’s hanging in there, clinging to the idea that at some point his luck will turn.

He’s too busy to realise there’s a much easier way to achieve financial security.

Victor has been through Simon’s experience. He was busy for the first few years after setting up his own graphic design agency.

It took him four years to reach “salary replacement”.

Victor got there in the end, purely through hard work … he managed to push through Type 1 Busyness Delusion.

It wasn’t smart, but his efforts and determination paid off in the end.

He now has his own version of financial security.

And is pushing on to reach for the 2nd F – Freedom.

For some reason, though, he’s busier than he’s ever been.

His business is growing, he’s recruiting his team, he’s doing what seems right.

But he’s finding it increasingly difficult to keep on top of everything.

When he was on his own, he knew the details of everything.

Now he fears people will make the wrong decisions. He fears critical client projects will fall behind schedule, or his team will make unnecessary mistakes.

He’s trying to stay on top of everything, but feels it’s increasingly slipping out of his grasp.

So how do you overcome The Busyness Delusion? …

Type 1 – Simon is doing what he believes is right.

He’s working hard, pushing through, trying to bring in enough income and focused on doing whatever it takes to have financial security.

Type 2 – Victor is also doing what he believes is right.

​Trying to keep on top of everything so mistakes don’t happen and focused on building his team so he can have freedom.

Chances are, you are acting like Simon or Victor too.

Their situations are the reality for over 95% of businesses in UK, USA and Australia (and likely almost every other country too).

It is possible to “muscle through” and overcome each version of The Busyness Delusion simply by sheer hard work.

However, that approach doesn’t usually succeed.

The good news is there’s a more effective and much easier way to overcome it.

It’s starts with self-diagnosis: recognising your own Busyness Delusion.

When you’ve realised your “type”, the answer is clear.